Gigi Hadid was born on April 23, 1995 in Los Angeles, California, U.S.. Following her high school graduation, she relocated to New York to concentrate on her studies. It was also in New York that she started a modeling career. She enrolled at The New School where she studied criminal psychology. As for her modeling career, it has actually started when she was two years old. Her first gig was for Baby Guess.

In 2013, she was signed to IMG Models after moving to New York. It was during this period that her modeling career flourished. Her career expanded internationally that by 2016, British Fashion Council named her International Model of the Year. On the small screen she appeared on The Real Housewives of Beverly Hills. She has also appeared on several music videos.


Has Gigi Hadid had Plastic Surgery?

She may just be in her early 20s, but the international model is already getting plastic surgery rumors. This shouldn’t be surprising since Gigi is now a huge celebrity. With her success in the modeling world, fans and critics alike question whether her present look is natural or whether it is a result of plastic surgery. With her transformation over the years, it can be said that the model has had changes in her appearance. Still, we can’t be sure if these changes are due to going under the knife or if these are just results of enhanced styling and make-up.

Checking Gigi’s old pictures, it was apparent how she was already blessed with amazing genes even as a teenager. As she continued to mature, her looks seemed to have undergone cosmetic enhancements. This is because her features have gone more well-defined. But looking at her closely, it would seem that the changes in her appearance are just results of make-up and her overall look is just the consequence of modern styling. 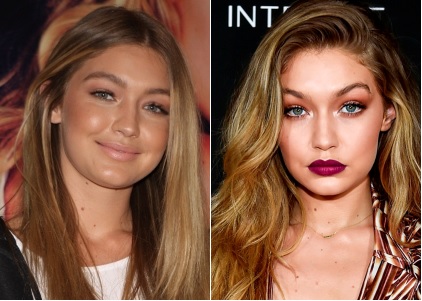